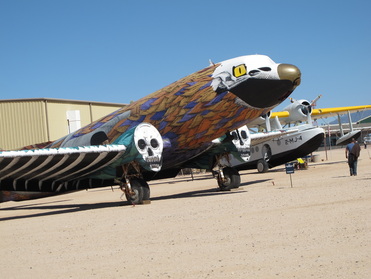 I flew into Tucson on Thursday, March 1st and drove straight to the Pima Air and Space Museum (15 minutes to the east) for a tour of their amazing collection of airplanes and helicopters, most of which are outside fading in the blistering Arizona sun and dust. Some of them, however, have been artistically repainted.

I also took a tour of their two WWII hangars with Bill Kinney, an excellent docent/guide. We were standing under the fuselage of a B-29, looking up through the open bomb bay doors, when he told us the two bombs dropped on Japan almost didn't elicit the desired response. We threatened a third bomb and they surrendered. We, of course, didn't actually have one.

The REAL Imogene At Last! 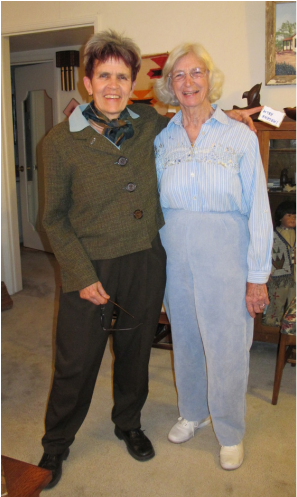 After wandering through Pima's planes all afternoon, I drove to the other side of town to meet the star attraction: my host, Imogene Bruner Helm. She's the irrepressible, 82-year-old daughter of Warren Bruner, the second coordinator of Curtiss-Wright's Cadette Program and a committed champion of women's right to compete in aero-engineering. Imogene has been a mainstay in my keeping the faith as I pursue this half-disappeared story. We gabbed as if we’d known each other a million years.

Friday, March 2nd, Imogene and I toured Tucson a bit (getting slightly lost in the hills, where new housing developments had made the once-familiar landscape rather foreign to her). We compensated by visiting the amazing Mini Time Machine Museum of Miniatures, where life shrank back down to a much more manageable and ever so eloquent size. Naturally, I found a replica of a petite airplane cafe (in menu at top of page) that kept me in the aviation groove. 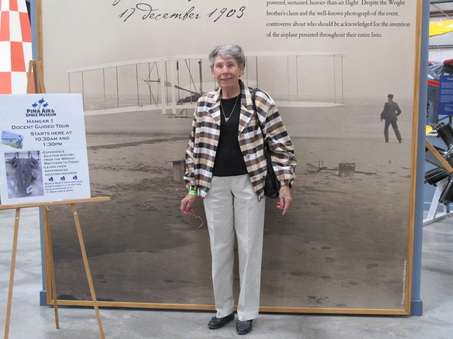 Saturday morning I gave my slide-show presentation at Pima to Imogene, her family and friends, a few museum members, and staff. One of the highlights was meeting Tucson resident Betty Morley (pictured below), wife of Richard Morley, late author of an important article on the Curtiss-Wright Company's presence in Columbus, Ohio. Betty came for the presentation and gave me a book from Richard's collection about the P-40, written by the chief engineer from Curtiss-Wright's Buffalo plant.

On my way to my next event, I drove by Davis Monthan AFB, passing so many large planes lined up it was like driving through California's Central Valley with its endless perfectly aligned rows of fruit and nut trees. Only these warbirds are covered with protective material and look spooky as hell. Since our military left Iraq, they’ve been parked here awaiting their next summons.

I spent an entertaining but monetarily unrewarding hour that sunny afternoon at an author’s table inside a dark, lightly frequented bookstore called Mostly Books before heading back to Imogene’s. 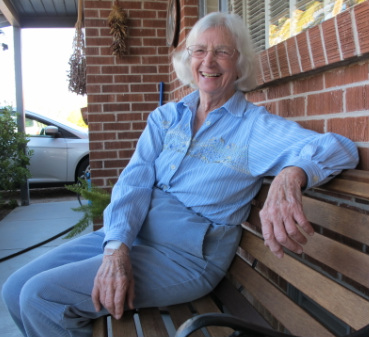 Saturday night, Imogene choreographed a soirée that validated every minute of my time in Tucson that hadn't produced audience or sales (i.e. the museum and bookstore). Guests included a variety of her family, friends, and other working acquaintances (including some from her flourishing flute club). They'd all come to hear how pursuing the Cadette story had led me to her door. It was a warm and welcoming salon and finger-food banquet with a rapt and enthusiastic audience, captured on video by Imogene’s son, Tim, whose hand went numb from holding the camera so long (and so steadily, I might add).

Thank you to all the Helms — but most especially to Imogene!