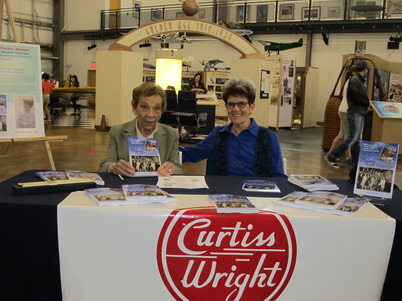 Saturday morning, Peggy and I drove down to set up in the main hangar as one of the many author tables lined up for the day. Everyone had to pass us as they headed toward the back door and the star metallic attractions (WWII planes) patiently waiting to be ogled, pawed, and photographed. We spoke to authors on either side of us, traded books with them, and hobnobbed with museum volunteers, most of whom Peggy knows. She’s been volunteering at the museum since I first interviewed my mother’s “Wild Bunch” friends (including her, Beth Wehner, and Betty Masket) at the Frontiers of Flight in March 2009 (picture at top of page).

In all that time, Peggy has maintained a low profile among the other museum volunteers about her WWII expertise as an aero-engineer. She prefers to focus on her post-war career as a mechanical draftsman for the petroleum industry. Her knowledge of aircraft construction and materials may be faded. But as we sat there, whenever she was engaged by any of the friendly volunteers who dropped by to ask why she was at this table with all these books, she couldn’t suppress a subtle glow of pride in the memories of her time as a Cadette. 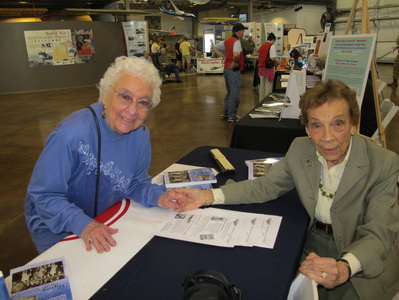 At 12:15 I was supposed to meet my next new Cadette (Laurel "Corky" McCorkle Williams — another “cover girl”), her sister Shirley, and niece Carol at the front door. I lingered there, handing out flyers, but didn’t see them. After fifteen minutes, I dialed the cell number Corky had given me and found out they’d arrived earlier and were already ensconced in the auditorium.

I went straight up to meet them and then led them back to the author’s table so Corky could meet her classmate, Peggy. They had a sweet reunion and looked like they were poised to carry on for the rest of the afternoon. But I hustled them into pack-up-and-leave mode and we carried all the books and other paraphernalia to the auditorium and set up hastily as people started arriving. 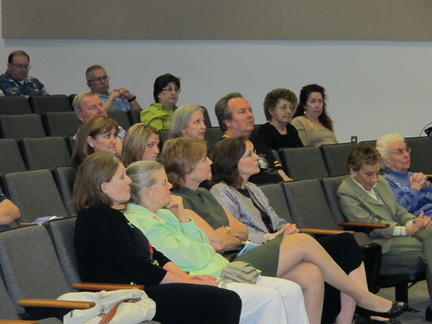 I knew that several descendants of two deceased Cadettes from the Purdue Class of ’43 were attending. One of them, Happi McQuirk, the daughter of Cadette Florence Mooring McQuirk (in the neon green shirt) invited her entire DAR group, 12 of whom actually showed up. Marian Jackson Smith, daughter of Cadette Josephine Johnson Jackson, came with her daughter. You could feel how much they missed their mothers and appreciated the belated recognition. This is why I continue carrying this "lost story" to museums around America.

Peggy and Corky answered questions onstage afterward, smiling throughout. This very attentive group showed genuine interest, a rich reward for all the months of preparation. (Peggy’s son Steve, who came with his wife Claire, kindly volunteered to shoot the event with my camera.)